This art project is on hiatus.  I certainly didn't finish the project within my self imposed deadline.  I did, however, come up with some very interesting techniques for making my own paint.

I'm now working on a new painting style (for me) called Gravity Painting.  You can check out the work on this blog:

A while ago, I crushed some of my Azurite. As I mentioned in a previous post, when I tried doing using the tried and true slurry technique, it made bubbles and a lot floated on top, similar to flour being poorly mixed with water. I let the pigment settle & water evaporate. As you can see in the photos, the slurry technique doesn't seem to be working well with water. I could try alcohol because it has a lower surface tension. The only problem is that even if it works better, I really don't want to make rubbing alcohol from scratch! I think I'd need a distillery license for that. So, maybe I need to try the soap technique. 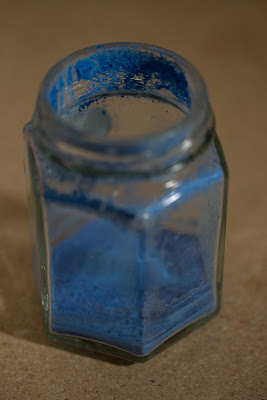 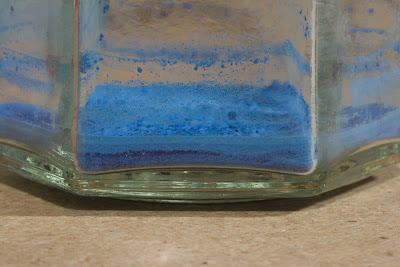 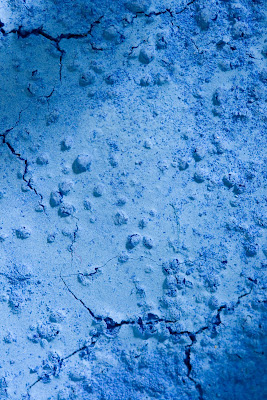 Over the weekend, the ochre finally dried again, and I had a chance to scratch away the last of the rough particles. 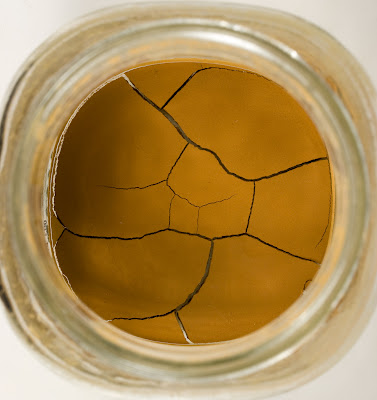 Drying. Still moist, but cracks have formed. Ever notice how mud cracks are always 3 lines at an intersection? Never 4 or 5? There's a reason for it (path of least resistance, conservation of energy, something like that) , but I don't know the details. Have them? Tell me! 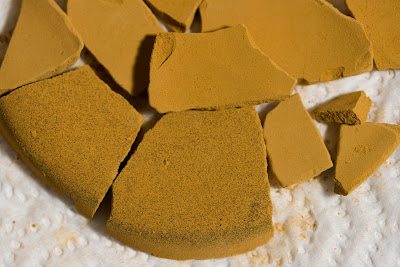 Here, a couple of the pieces are flipped to show the sandy bottom. This part was scratched off with a putty knife, leaving only the finer pigment particles. 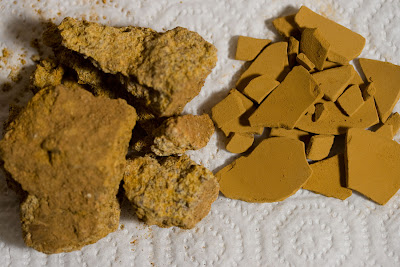 An example of the raw dirt & the dirt after it's been refined via a slurry twice. 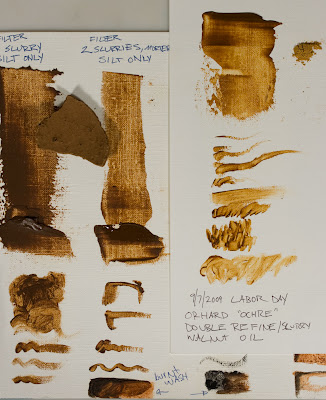 Here is a disappointing image: When mixed with walnut oil, it is very close to the normal umber that I got from my parent's regular soil (the kind that doesn't require heavy digging to get to it). It's a tiny bit lighter and more yellow, but not nearly as much so as when it is in powder form. 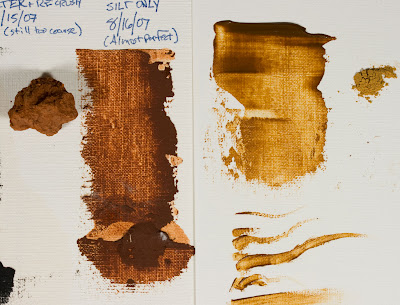 There's a bigger difference between it & the burnt umber though :)

I'm going to try using this pigment in a tempra (egg whites) medium and see how it looks when it dries next. If that doesn't work, then I question it if will be worth using it along with the other two tones. It's just not yellow enough like this, and not worth digging deep to get to it :(
Posted by TMC at 9:55 PM

I'm going to go out on a limb & call this stuff ochre. It's dirt, and it's yellowish. Close enough for me right now. It also drys my hands out much like Burning Man Playa dust, so I wonder if it is an alkaline... I might test that out with vinegar to see if it bubbles. If so, maybe I should neutralize it before using it on a painting.

I got tired of waiting for the slurry to dry, so I scooped out the good stuff with a putty knife & spread it on paper towels so it would dry faster. I figured this would be OK, because I was planning on doing two slurrys to get the best of the best.

When it's wet, it gets really dark and brownish. The brown piece between the putt knife & the dried ochre is what a moment prior was dry ochre, but sucked up some moisture from the wet ochre on the left. This makes me think it's not going to mix with walnut oil well. I'm guessing it will work better in egg yolk. I'll have to try them out side by side and see what happens. 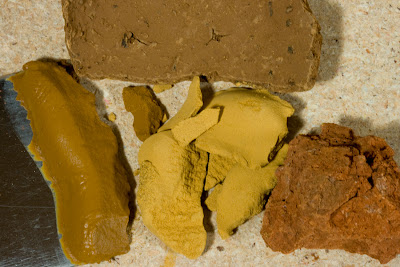 On the left is the silt that I scooped out & on the right is all the sand & coarse dirt. I'd guess the proportion is about 1/8 silt. 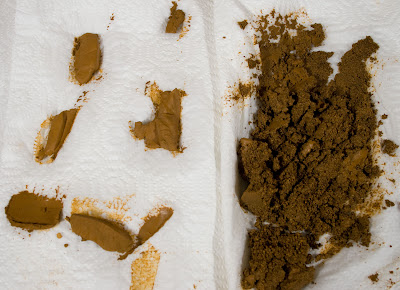 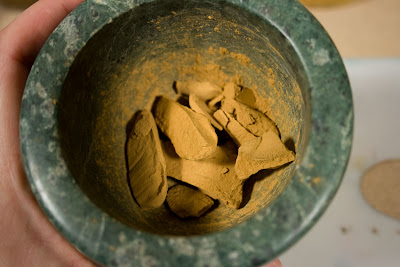 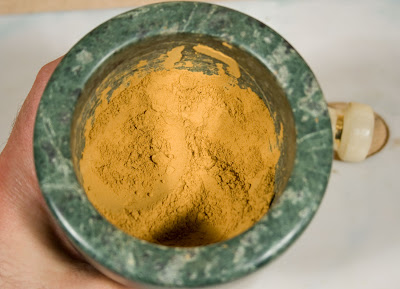 This much pigment came from about 1/4 pound of dirt. I then took all of this, and mixed it in water again (not pictured). I was surprised to see a fair amount of sand separate out to the bottom! I'll update with final pigment & tests in a few more days. It will have to dry (not get scooped out) this time so I can scratch off the coarse particles more carefully. That takes about a week. 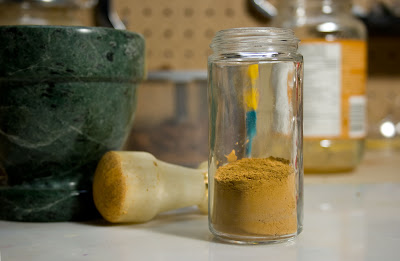 I visited my parent's house two weekends ago, and found yet another earth pigment! My dad had dug a very deep hole with his excavator, in hopes that he could make an artificial pond. No such luck. But what he thinks might be sandstone (too soft for it in my opinion) I think might be related to ochre. 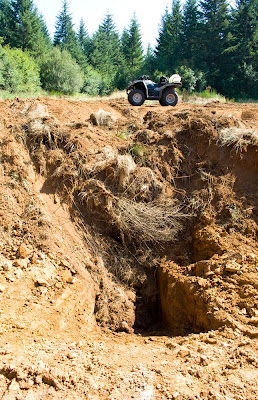 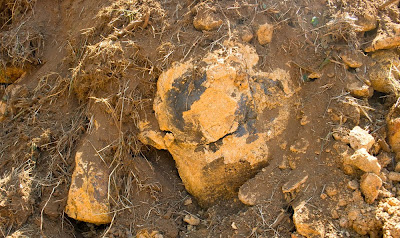 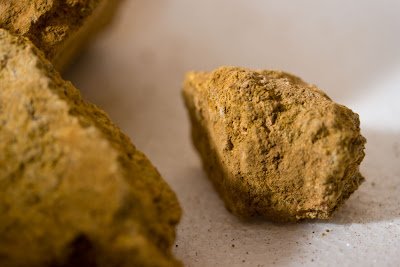 Here's a couple of comparison shots between the three tones I've found on his land so far. The brown/red is his normal soil, the reddest sample is that same soil after a bonfire has taken place on top of it, and the yellow/ochre is in his orchard, starting at about 4 feet deep in pockets, and showing up as deep as the 12' or so hole that he dug. 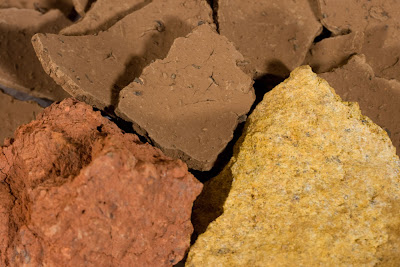 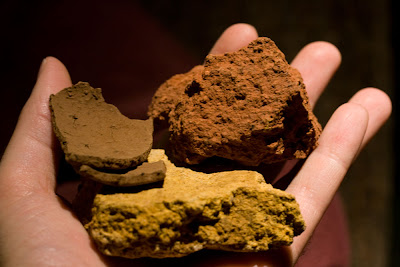 By the way, I was able to see different colors in this sample, like sedimentary layers. Maybe in a few thousand years, it would become a sedimentary rock.

Here's what it looks like in a standard slurry test (my attempt to get the fine particles separated out from the coarse ones with water. It settled in under an hour, very, very fast for such a test!). There's a lot of sand in there. I crushed it first in my mortar, and I think the crushing might have affected the color a bit. It's redder now. We'll see how it handles when it dries. 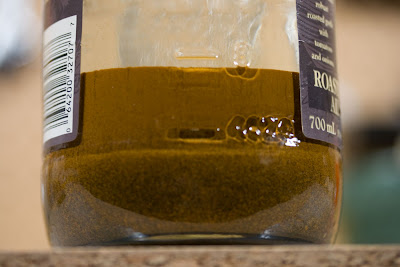 I finally did a sound check at our house. One of the things that has been slowing my progress (besides Valve's Orange Box-O-Distractions) is my worry that I'll wake Ravenna up at night. So, I cranked some music in the garage & listened in her room. Barely can hear it!

I crushed some Azurite tonight & ground it into a powder. I wore a particle mask, but when I took it off after I was done, there was no burning hair smell like Lapis Lazuli. I then mixed it with water, so the finer particles will settle on the top. I've read that mixing it with soap & boiling it will leave the good stuff on the top, but I didn't want to go through all the trouble, so went with the slower way.

Since I was at it, I also did the same for the crushed eggshell in another container. Both formed bubbles, and the azurite had a lot of floating pigment on top, as you would expect when mixing flour with water the wrong way. I'll hopefully get some photos soon.
Posted by TMC at 12:02 AM

I've been reading The Materials & Techniques of Medieval Painting By Daniel V. Thompson on the bus for a couple of weeks now.

I'm pleasantly surprised that some of the techniques I came up with to create a pigment are listed in here. For example, I took a patina recipe on the web (salt, ammonia, & vinegar), and experimented with it until I found that using just vinegar produces the best pigment. This was done a variety of ways in Medieval times for the same reason. The pigment is called 'Verdigris', also described in the book as an 'acetate of copper'.

The bad news is that I just did an MSDS search on the effects of Copper (II) acetate, and it is not safe at all. Here's the MSDS, and here is the wiki entry on it.

By the way, vinegar fumes will create lead white pigment, which is potentially even scarier than copper (but not by much, it would seem)

I may continue to use this green pigment, but maybe it would be safer to stick with ground malchite.

Hazards listed on the MSDS site (thankfully I've been using a resperator & keeping Ravenna out of the garage with working with it):

Inhalation:
Causes irritation to respiratory tract, symptoms may include coughing, sore throat, and shortness of breath. May result in ulceration and perforation of respiratory tract. When heated, this compound may give off copper fume, which can cause symptoms similar to the common cold, including chills and stuffiness of the head.
Ingestion:
May cause burning pain in the mouth, esophagus, and stomach. Hemorrhagic gastritis, nausea, vomiting, abdominal pain, metallic taste, and diarrhea may occur. If vomiting does not occur immediately systemic copper poisoning may occur. Symptoms may include capillary damage, headache, cold sweat, weak pulse, kidney and liver damage, central nervous excitation followed by depression, jaundice, convulsions, blood effects, paralysis and coma. Death may occur from shock or renal failure.
Skin Contact:
May cause irritation with redness and pain.
Eye Contact:
Corrosive. May cause irritation, redness, pain, blurred vision, discoloration, and damage.
Chronic Exposure:
Prolonged or repeated skin exposure may cause dermatitis. Prolonged or repeated exposure to dusts of copper salts may cause discoloration of the skin or hair, blood and liver damage, ulceration and perforation of the nasal septum, runny nose, metallic taste, and atrophic changes and irritation of the mucous membranes.
Aggravation of Pre-existing Conditions:
Persons with pre-existing skin disorders, impaired liver, kidney, or pulmonary function, glucose 6-phosphate-dehydrogenase deficiency, or pre-existing Wilson's disease may be more susceptible to the effects of this material.