Just a quick note this week: Rather than spend the last hour hammering out a new entry for this blog (about the new pigment experimentation I’ve been doing), I created a Listmania entry on Amazon about the books that I’ve been referencing for this project. Please check out “Books to Build a Civilization from Scratch (or at least a painting)”

More on pigments next week. (#^$&@ addictive time-sucking internet!)
Posted by TMC at 12:26 AM No comments:

Bamboo grows really well in this region and can be used for a ton of stuff: quill-like pens, scaffolding, flutes, bike frames, mills, and practically anything made on Gilligan’s island.

A quick search on Google has netted a bunch of really great photos of bamboo scaffolding, which is a testament to the strength of the bamboo & the incredible skill of the people who put it together and work on the scaffolds. 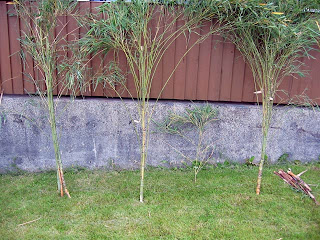 I’m hoping to make a loom, pens, brush handles, and other items with it. (‘bamboo loom’ generates some good Google results too). My manager just moved into a house, and had a bunch of it growing on his property. As he wants to landscape, he offered to let me have at taking as much as I wanted. Using only a hatchet and my hands (which if I ever use his bamboo, I’ll justify this by forging my own hatchet of similar size and quality), I chopped and pulled it out of the earth. I spent about ½ hour to get there, ½ of work, ½ hour back, another hour trimming it, and a bunch of time researching proper drying techniques before giving up and just letting it stand vertically outside my house. 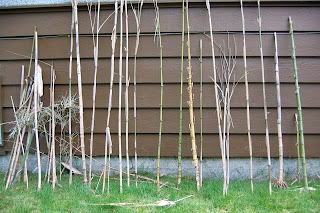 After all of this, Ravenna and I went for a walk around the neighborhood, and in our alley, found a huge bundle of bamboo (a straighter, lighter variety) on top of a neighbor’s garbage can. Needless to say, I picked up a bunch of it too. I consider this FAIR GAME for my project as A) it grew naturally in my neighborhood, B) I personally didn’t use any modern tools to cut it, so hey, my neighbor *could* have hacked at it with a really sharp rock and C) I’m not going to look a cosmic gift horse in the mouth.

Now the only thing I have to worry about in the drying process is keeping it from the cats, as they are drawn to it like catnip. 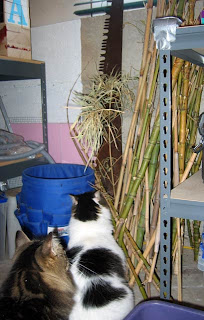 I don’t have any twine available right now, so I’m just holding onto the bamboo until I can find a decent binder for it. That’ll buy me some time to track down some good loom plans to try out.

Next: Pigment update on Watercolor and refined oil color.
Posted by TMC at 12:02 AM No comments:

Just a quick post this weekend, unfortunately. I discovered a painful but abundant way to create a new pigment completely from scratch. Let's just say that although the ochre color is consistent and was plentiful for me this weekend, I don't think anyone would have been able to handle the odor.

Hope to be feeling better next week,
Troy
Posted by TMC at 10:06 PM No comments:

Llamas Get Skittish Around Shears

On May 12th, Alyssa, Ravenna and I went to Fibrefest International 2007 convention, in peaceful Abbotsford, BC.

Besides learning that I’m allergic to llamas and /or alpacas (which were in abundance), I also had a chance to speak to people at two booths which directly relate to this art project. 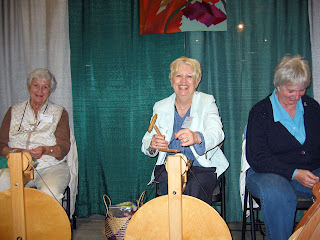 The first booth was the Peace Arch Weavers and Spinners Guild. They let me try my hand at one of their looms. Quick lesson here: Weaving by hand is very, very time consuming! But it’s also fun. I talked to them about appropriate material for creating a painting canvas. They were all in agreement that flax (linen) would be the way to go for canvas material, as wool and other animal fur won’t hold the paint as well. The downside to weaving linen, however, is that it has very little stretch compared to other fibers. This means that it’s easier to make errors, creating an irregular canvas surface.

After I told them about my project, they thought idea of one person doing everything from scratch was unprecedented historically. They said that one thing that bound society together was the interdependence of people. In the past, one person would grow the flax, have another rett the flax, another spin it into thread and yarn, and someone else to weave it into canvas. Specializing makes for better products. More importantly to them, specializing helped foster community, as everyone depended on one another for survival. They thought that it would make more sense to barter for goods and services if I wanted to replicate how things used to be done. They have a very valid point, and although I am still planning on doing most of the steps on my own, I think it might be OK to get help from others (someone to man the bellows during smelting?), barter services or goods (I’ll have some nice apples and plums soon, and could barter them for other from scratch items). Besides, my family is already watering my flax for me. For what it’s worth, Dale Chihuly has a whole team of artists who work with him to create his vision: (wiki entry)
And Damien Hirst just hires people to do his art for him. OK, I think that’s going just a little too far. The second booth I visited was Wild Rose Fibres
Colleen Hovey is the owner, and gave me an impromptu lesson on how to use a drop spindle, to spin fiber into thread. She sells a wide variety of fibres and is a dealer for Kromski Spinning Wheels, shipping throughout Canada and the United States. I was planning on buying some flax from her to learn how to spin fiber as a proof-of-concept for the flax that is growing at my parent’s house. But when I told her about my project, she donated 50 grams to the cause! So, if you are thinking about spinning your own yarn, please visit her website!

I’ll be giving an update on my spinning & weaving results in the coming months. Coming up next, Bamboo gathering. It worked for the Skipper & Gilligan, so why not me?
Posted by TMC at 12:13 AM No comments:

On our way back from Portland (in April… maybe I should start posting twice weekly), we visited the Squaxin Island Tribe Museum Library and Research Center in Shelton, Washington. Driving north on Hwy 101, the road crisscrosses through many tribal reservations.

Although they are considered separate nations from the US, you don’t have to deal with the border crossing wait as you would coming into Canada. (For more basic information on tribal reservations, wikipedia has a good starting point: Tribal Reservations)

At the Museum, I met Charlene Krise, executive director of the museum. When I asked her about traditional paint making techniques, she had a couple of suggestions. The first suggestions was to try baking or firing my parent’s red clay dirt to get even darker colors. Looks like this might expand my palate, and also make for a lot of experiments!

She also mentioned that a number of tribal artists used to use chum (salmon) eggs as the basis of their paint medium. These eggs have a very high oil content. (I think I’ll stick with walnut oil, at least for now).

I spoke with her brother George, one of the artists featured at the museum, and asked him what kind of paint he used on his cedar sculptures. He uses acrylic. To him, it’s the act of creation that is important. He doesn’t feel that native art is any less authentic if modern paints or tools are used. He still has an intimate connection to his art, and it was just as moving to me. As photos were not permitted inside the museum, I encourage you to visit or take a look at their website.
http://www.squaxinisland.org/
http://www.squaxinislandmuseum.org/
Posted by TMC at 12:49 AM 2 comments: